Record for consultation to the head of department
x

Degenerative and dystrophic spine changes happen almost in all people with aging. It is due to the features of spine structure and those loads, which spine bears during entire life.
During spine aging, its moving components gradually wear. This process has several stages, described in the 1970s by Kirkcaldy-Willis.

Stage 1 – initial degenerative changes (Disc protrusion)
In this stage begins the degeneration of intervertebral cartilage, which represents a change in the molecular structure, decrease in liquid contents, and as a consequence – reduction in disc elasticity, although the elasticity of fibrous ring in this phase remains. Therefore at this stage, MRI shows only disc protrusion, i.e., small (less than 1-3 mm) bulging, which doesn't breach the limits of reserve spaces.
Another MRI sign of early disc degeneration is the change in signal intensity on T-2 weighted spine images.
As a result of pulpous nucleus dehydration, its image becomes less bright, and, instead of the dazzling-white signal from the healthy cartilage, – we see a light-grey signal, or – in the case of severe dehydration – dark-grey signal.

Reduction in disc height and elasticity, established protrusion are causing prolonged excess load on the fibrous ring, which begin to lose its elasticity and destroys. At this stage, disc prolapse happens (bulging 3-6 mm on MRI) and, subsequently, disc herniation. If disc destruction is causing compression of nerve roots in the narrow openings, it leads to severe pains at the level of affected nerve root, with the characteristic neurological symptoms. This compression could resolve spontaneously due to certain biological processes, and pain disappears. It means that medical therapy was successful. However, compression can stay for a long time, causing persistent pain, and sometimes numbness in the affected lower limb or muscle problems. These are indications to spine surgery for the elimination of nerve root compression.
As a rule, at this stage of disc degeneration surgery includes installation of implants due to severe spine instability.
spine instability extension spine instability Spine instability flexure 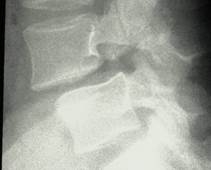 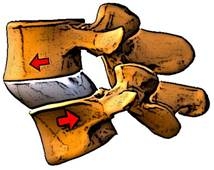 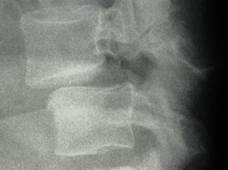 It sets some limitations on the extreme loads on the spine (for example, sky jumping, hockey, skiing are not recommended after such surgery). However, new implants help to avoid these limitations.

Isolated spine fixation for treating the segmental instability, without microsurgical decompression, is also performed in many centers. Such procedure can be done percutaneously, without the large incision. As an alternative to an operation, the patient can use proper stabilizing orthosis, wearing it before the development of the following stage.

Stage 3 – re-stabilization  (disc osteophyte)
In this stage disc is completely dehydrated, its height sharply decreases, elasticity is lost, as well as mobility between two vertebrae. This stage is associated with the appearance of osteophytes – solid bone deposits, which fix several vertebrae together and restrict their movement relative to each other. It is the natural mechanism for eliminating segmental instability. In elderly patients, osteophytes are present at all spine levels. At the young age, the osteophytes are rarely encountered and usually are the evidence of local spine problem. Osteophytes can also compress nerve roots, which is accompanied by radicular pains. However, since bone compression develops gradually, during the extended period, nerve tissue can adapt to the changing anatomy, and patients can live with such chronic pain for a long time. Only severe stenosis of spinal canal forces them to seek surgical treatment.

In this stage, in spite of already existing natural vertebral fusion, surgical spine fixation is recommended. The reason is that most of the newly formed bone is removed during decompression procedure in order to free nerve roots. The removal of bone mass leads to the instability, which, in turn, is fixed by the installation of spinal implants.